To be able to access a Dynamics 365 CRM, any user with a valid license must:

Security Roles define the way users can access and handle data in Dynamics 365. It enables administrators to control access to data and ensure that each user has the information that they need to complete their tasks and nothing more.
With this approach, Dynamics 365 enables to:

Security Roles can be seen as a matrix of privileges and access levels for all entities. 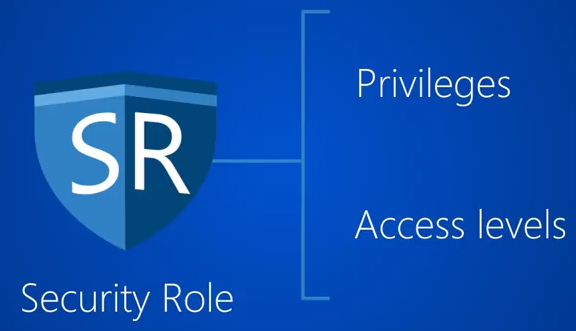 Privileges enable users to take actions on records. They are the basic security unit that details what actions a user can perform in the CRM.

The above height privileges are called “record-level privileges”. They defined which actions a user can do. There are also “task-based privileges”. Those miscellaneous privileges are not linked to an entity directly but operate on specific tasks, such as viewing audit history, publish e-mails, bulk edit, export data to Excel, etc…
In Dynamics 365, task-based privileges are at the bottom of the Security Role form.
Note that it’s not possible to remove access for a given record. Any change to a security role privilege applies to all records of that record type – exception made if the user has been given access to a record via the “Share” functionality.

Determine the scopes a user can perform a given privilege on data. 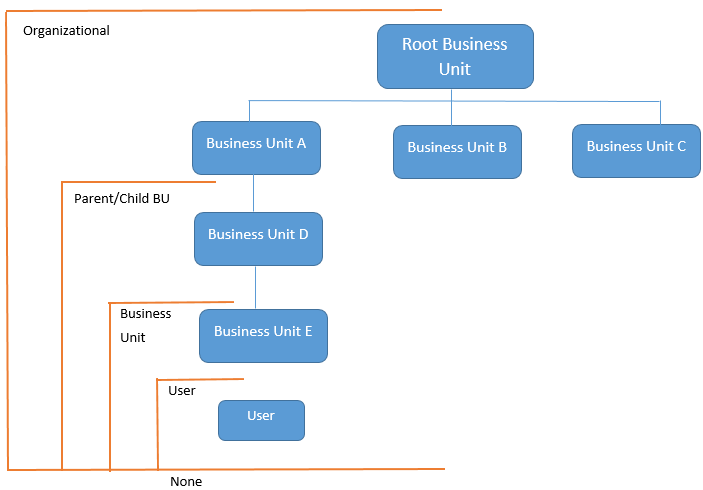 In Dynamics 365, this is indicated by the degree of fill and color of the little circles against each entity for each privilege.

Example: For the security role below, a user assigned to it can create only its own records – but no records under other user names. But users can delete contacts owned by anyone in their business unit. They can also read and edit any contacts in the entire CRM.

Entity Ownership: When creating an entity, administrators need to specify the kind of ownership between “User or Teams” and “Organization”. By default, the value is set to “User or Teams”.

If “Organization” is chosen, it will have an impact on the Privileges and Access levels available. As the entity is owned by the organization, there is no specific owner and no notion of Business Unit ownership.

Therefore, in the Security Roles for those entities: 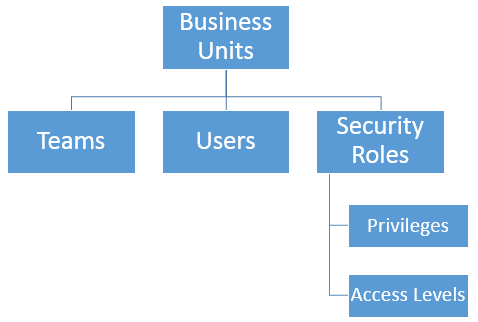 Business units are useful if the company segregates its business and needs to have different data access for each subsidiary. If there is no need to segregate data between subsidiaries, divisions, or departments then there will only be the one business unit. 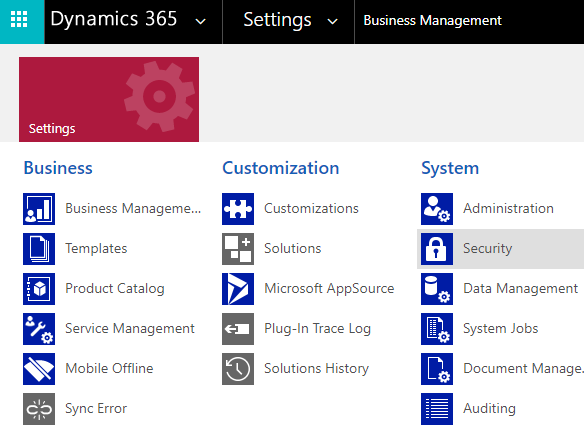 Then click on “User” and select one or multiple users. Then click on “Manage Roles” in the ribbon.
A pop-up “Manage User Roles” will appear. Security Roles assigned to the user(s) need to be selected. 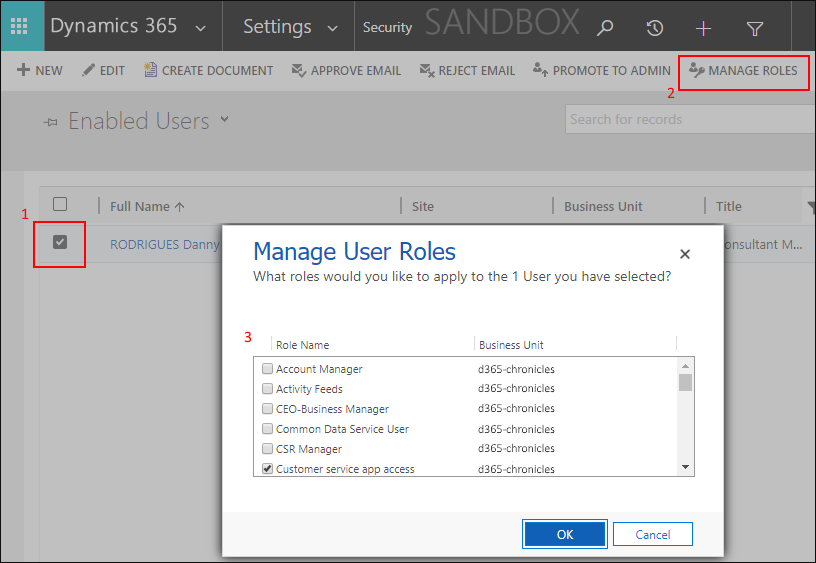 Dynamics 365 Teams are a collection of users. Those users can be from the same business unit but also for different ones. Users can also belong to multiple teams.
There are two kinds of teams in Dynamics 365:

Use Owner Teams when the number of teams is known at the design time of Dynamics 365 and when owning records by entities others than users is required by the company’s business policies.

When the number of teams is not known as design time, when teams are dynamically formed and dissolved or a unique set of users requires access to a single record without having ownership, Access Teams should be used.

Hierarchical security gives managers the privileges to read, update, append, and append to their subordinates’ records. It’s an addition to the security model in Dynamics 365 and all can be used together at the same time.

Hierarchical security enables easier visibility of subordinates’ activities that can be used in a dashboard and for easy reporting. The feature grants read permissions to managers above the direct manager[2]

Two security models can be used for hierarchies:

By default, Hierarchical Security is disabled. Administrators need to enable it. Also, note that System Administrator can exclude given entities from the hierarchy model.

As a rule, security roles should not be created from scratch. The best approach is to take a pre-defined security role, modify it, and save it under a new name. It enables to maintain a certain consistency and avoid mistakes such as forgetting “basics” miscellaneous privileges (e.g: the Read privilege on the entity “Web Resource”).

Be careful when a security role is being renamed. Dynamics 365 doesn’t prevent two security roles to have the same name!

Microsoft offers a solution that contains a Security Role name “min priv apps use”. As the name suggests, this role contains the minimum privilege and access levels required to log in the Dynamics 365. Users assigned only to this security role will not be able to change any record, but they can at least log in.

The solution can be found in Microsoft documentation.

Recommendation: It’s considered as a best practice to use the cumulative property of security roles. Each user should be assigned to the “Minimum User Security Role” and then security roles should be added to the users to enable them to work with the data.
In that way, the minimum user security role ensures that users can log in Dynamics and the other security role is only related to entities and task-level privileges.

In Dynamics 365, the list of Security Roles is available under the “Security” region of Dynamics 365 configuration panel: Settings -> System -> Security.

A click on the feature “Security Roles” will display the list of all Security Roles, sort by their name in alphabetical order by default. 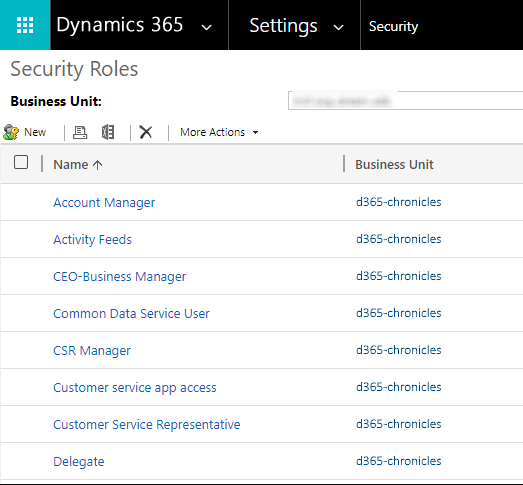 When clicking on a role, the matrix contains privileges and access levels is displayed. Privileges are grouped under different tabs based on their functionality. These groups include Core Records, Marketing, Sales, Service, Business Management, Service Management, Customization and Custom Entities.

In addition to defining security around users and teams, a more minute level regulation of security can be done around a single field. This is achieved with Field Security Profiles.

A field security profile gives access to certain fields that have been enabled for field-level security. It allows users to read and/or update and/or create such fields. Users without access will see the field’s name but not its value – it will be replaced by “****”.

In the Security region of Dynamics 365 configuration, the features “Field Security Profile” will display a list with all profiles. To configure a profile, administrators can: 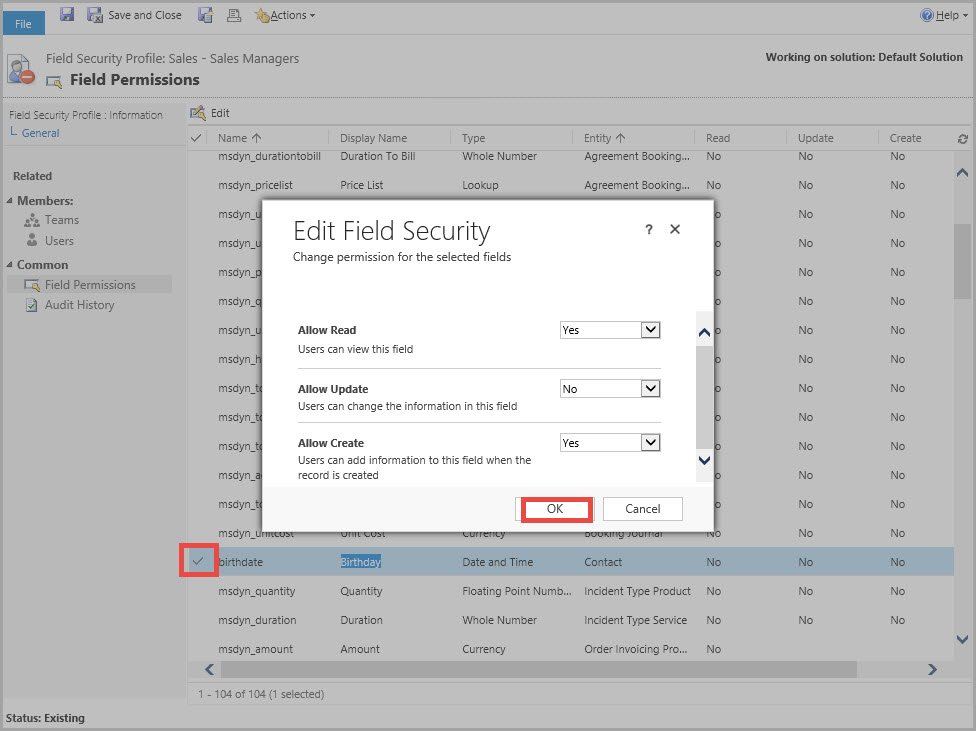 For a field to be eligible to Field-level security, it must be specifically enabled:

In a form, fields enabled for Field Security are indicated with a small key after their name.

Note that System Administrator don’t need to be assigned to a Field Security Profile to see a field – they can do everything!

Some out-of-the-box fields like “Created By” or “Parent Id” cannot be enabled for Field Security.

Security Roles are used to managing access to the data and action that can be taken on it, but it also enables to change of the UI of a form. For example, by offering fewer options to a user, it creates a cleaner UI and the interface is enhanced.
It’s possible to enable access to a given form only for given Security Roles. When customizing a form, the button “Enable Security Roles” allows to select one or multiple Security Roles that will be able to interact with the form. By default, all Security Roles are selected.

If a user as access to more than one security role, a drop-down list will let the user choose which form will be displayed. System Administrators can set the orders of the forms when customizing the entity.

As for Forms, Dashboards in Dynamics 365 can also be enabled for only a set of selected Security Roles.

As for all records in Dynamics 365, each Security Role is assigned with a unique identifier and can be accessed through the Web API for example. The GUID can be found in the URL when opening a security role in Dynamics 365.

There is also an entity called “Privileges” in Dynamics 365. When an entity is created, there are 8 new “Privileges” records that are created – one per security role privilege. Each of these records has a GUID. When a user encounters an issue related to security roles privileges, the GUID is printed in the error log file.

Security Roles with privileges and access levels are specific to Dynamics 365. Security in other products of the Microsoft Family is managed differently, with each application having its one way to deal with data security and management.
For example, Sharepoint’s security contains Groups, Sites, and sharing capabilities and PowerBi makes usage of “Row-level security (RLS)”.
When combining such products together, the way to handle data security should be analyzed, defined, and discussed.

[1] When changing the business unit of a user, the associate security roles are removed. The user will not have access to Dynamics until a new role is assigned.

[2] While configuring hierarchical security, the parameter “Hierarchy Depth” controls direct manager’s access to the subordinate’s records of their subordinates. Configuring this depth above 5 can impact negatively the performance of the system. Microsoft recommends keeping the effective hierarchy security to 50 users or less under a manager/position.

[3] This Job Position Hierarchy is also used by the button “View Hierarchy”  in the User entity.

Tags
Customization
Deep Dive
Security
Danny Rodrigues Alves
Graduated from the EPFL in Computer Science and Management, Technology and Entrepreneurship, I start working with Dynamics 365 from 2017. Since them, I only lives for Plugins, Custom Actions, Logic Apps, Azure Functions, and all their relatives. Experienced with both on-prem and cloud environments, I always seek to add a bit of AI in my projects.

2 or more Security Roles for one user

Hi
If one user had 2 or more security roles, then system consider all access, or consider the minimum access throughout the roles?
Thanks

Security role privileges are cumulative: having more than one security role gives a user every privilege available in every role. So all access are given.