Power Automate is a low-code tool that allows creating automated workflows between application and services to synchronise files, get notifications, collect data and more. These processes can be triggered by events or manually.

Below is an overview of the interface of a Power Automate Flow:

As can be seen, Power Automate allows to define processes using a graphical interface. The goal is to make it available to a large audience.
Power Automate has hundreds of different data sources and services, which are called “Connectors”. Below is a very short overview of some main connectors:

Note: The Power Automate was formerly called Microsoft Flow. This old name is still used in many documentations.

Workflows in Dynamics 365 are a main component to implement some custom logic in the CRM. They are configured with a graphical interface.
Today, when creating a background Workflow in Dynamics 365 the following message is displayed:

Use Power Automate for Dynamics 365

To use Power Automate with Dynamics 365, go to the admin portal of Power Apps: make.powerapps.com.
Then, go in Solutions -> New Solution -> New Flow

Then, select the Flow and click Edit -> redirects to page of Power Automate: 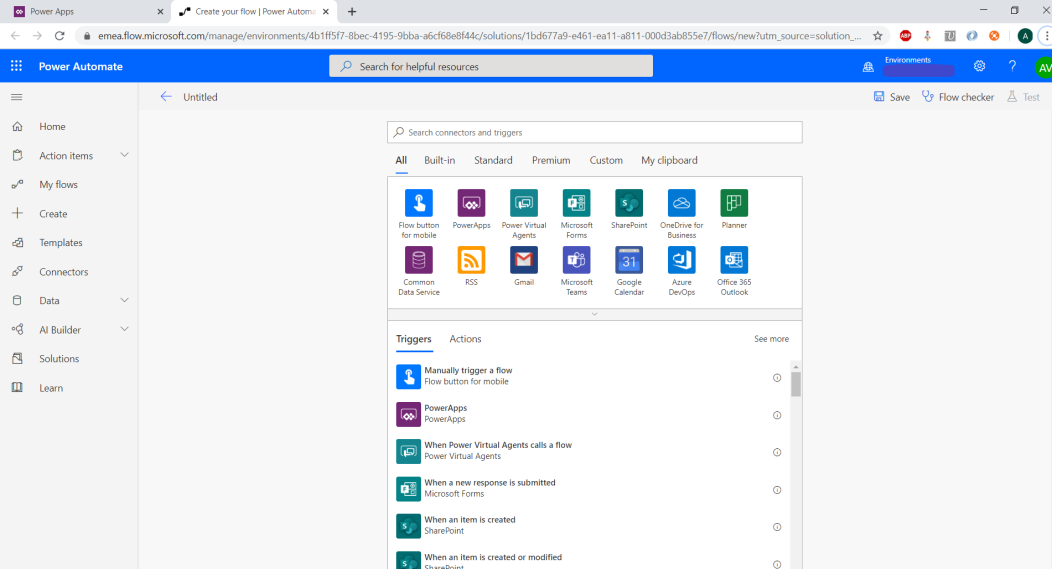 The last one, “Common Data Service (current environment)”, should always be used. It provides more functionalities that the other connectors (see section "Power Automate in Dynamics 365 Solutions" below).

The connector “Common Data Service (current environment)” has one trigger available:
“When a record is created, updated or deleted” 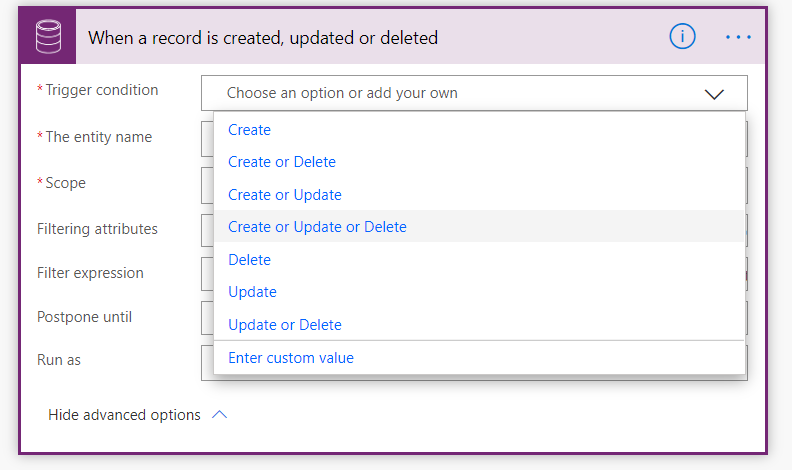 The trigger allows to choose the condition to run the Flow (on Create, on Update, etc.). It applies to a precise Entity. As in D365 Workflows, the Scope can be chosen (Organization, User...). It can be filtered to make the trigger active only on some attributes. It can also be postponed.

Here are the actions available in this connector:

This Part provides an overview of the Licensing model associated to Power Automate.
As the licensing model evolves frequently it is important to check it regularly.

These 2 licenses are limited to 5,000 daily API requests.
Note: Purchasing and assigning licenses requires access to the Microsoft 365 admin center with either the global administrator or billing administrator roles.

If the embedded flow is not within the context of the Dynamics 365 application, then standalone Power Automate licenses will need to be purchased.

The API requests are limited to a certain daily amount. This amount depends on the license purchased. Here are the API limits for licences:

So, Power Automate is a powerful automation tool that provides many features to interact with Dynamics 365. So, it has functionalities similar to the Workflows of Dynamics 365. But there are still important differences between the two tools.
This part will present cases for which a tool might be better suited than the other.

Power Automate has many tools similar to code-based programming languages, such as loops, conditions, variables.
However, Flows of Power Automate provide much less functionalities than a code-based programming language. For instance, they are less efficient to handle exceptions and to debug processes.
Several processes made at ELCA with Power Automate have become very complex and very hard to maintain. In these cases, coding would have been a better solution.
So, Power Automate should be used with simple processes that do not contain too complex logic. It should be used as an orchestrator: to handle connection to data sources/services and to launch code-based sub processes (if the logic is complex).

Tags
Power Automate
Integration
API
Power Apps
Amaury Veron
Graduated from EPFL (In Management, Technology, Entrepreneurship). I love the Swiss environment, the mountains, the Lake. I work at ELCA as a Dynamics 365 engineer. I also work quite much on Azure and sometimes on Power BI. I love these new technologies and the huge impact they have on the Businesses. The Chronicles are a great way for me to share with others on captivating subjects.

Good article Amaury, thanks. Question...should I consider exploring Power Automate for tasks previously done as a JavaScript web resource. For example, if i wanted to validate an entry into a text field BEFORE the record was saved, thus preventing the record from being saved if it failed?

Thank you Gerald for your…

For Dataverse (new name of Common Data Service), a Power Automate Flow can only be triggered after a record is saved. So, you would not be able to use it to validate an entry before the record is saved.

Yes I think that this can be a good idea, when the process you want to implement can occur after saving of a record.

In term of performance, it is important to keep in mind that Power Automate runs Server-Side and JavaScript runs Client-Side. Sometimes, Power Automate Flows can take a few seconds before being triggered. Whereas JavaScript code is instantly triggered.

Another low-code tool that you might consider using is the Business Rule, that can run on the Client Side like JavaScript: https://docs.microsoft.com/en-us/dynamics365/customerengagement/on-premises/customize/create-business-rules-recommendations-apply-logic-form (we don’t have an article yet about it in our blog but it might come in the future)

With Business Rules you can validate data and show error messages. And also do actions such as Clear a field, Set a field as Required, Show or Display a field, … :)

I hope this will help you!